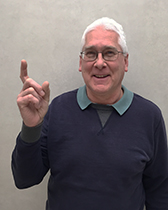 John Paluch is  Professor of Instruction in the Department of German and has taught language and content courses at Northwestern since 1990. His effective teaching methods have earned him nomination to the Student Government Faculty Honor Roll in 2003, 2004, 2013 and 2020. He also received the Northwestern Alumni Association Teaching Award in 2002.

As the departmental Study Abroad Adviser, he works with students to integrate overseas study into their undergraduate curriculum and also helps students to identify additional opportunities to return to Germany, Austria, or Switzerland following graduation. As a member of the campus Fulbright Committee, he works with students as they prepare Fulbright and DAAD grant applications. He is an active member of the Council on Language Instruction and has a long association with the International Studies Residential College. From 2015-2018 he was an elected member of the Northwestern University Senate.

John has been involved with the Northern Illinois Chapter of the American Association since beginning his graduate studies at the University of Illinois at Chicago in 1986 and has held positions as membership chair, vice-president and president. He has been particularly involved with the AATG Testing and Awards program, which was hosted by Northwestern for many years. With other AATG members he founded the Immersion Weekend for Teachers and was director from 1998-2011. He is also active with the Swiss Benevolent Society (SBS) where he chairs the education committee and is current president.