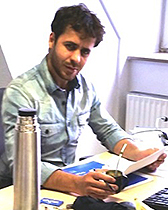 Héctor Feliciano is a PhD student in the German Literature and Critical Thought program at Northwestern University, affiliated to the Critical Theory Cluster. As part of a doctoral joint agreement, he is also enrolled as a PhD student in “German Philology” at the University of Münster. Prior to coming to NU, he studied German Philology and Philosophy and completed his Magister Artium degree on 2014 at the University of Heidelberg.  During his studies, he worked five years for the Institut für Deutsche Sprache (IDS) as a research assistant.  His research interests include American, Russian and German Literature from the 18th century to the present, theories of reading, theories of literature, (post-) hermeneutics, as well as Jewish and Christian medieval hermeneutical thought. He is also interested in the interrelation between hermeneutical, narrative and world making theories.