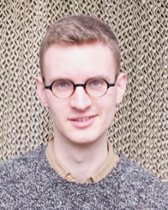 Jonas is a Ph.D. student in the Program of Comparative Literary Studies with a home department in German. Originally from Bochum, Germany, he received his B.A. in philosophy from Yale University in 2014 with a senior project on Martin Heidegger. He came to Northwestern in 2014 and spent the academic year 2017-18 in Paris as a fellow in the “Paris Program in Critical Theory.”

His dissertation project is tentatively titled “The Smell of Language: Messianism and Olfactory Poetics in Modernity” and investigates notions of smell in Hölderlin, Baudelaire, Nietzsche, and Ponge. Jonas recently received Northwestern's Beiling Wu Prize for a paper on Giorgio Agamben’s concept of thinking. His first article in a peer-reviewed journal appeared in The Germanic Review, Volume 91, Issue 2, (2016) and is titled: “‘Intriguing Ideas, Plotting Bögen’: Thinking the Limit of Allegory in Walter Benjamin's Trauerspielbuch”. A second article is forthcoming in Comparative Literature with the title “Towards an Aesthetics of Obscurity: from Baumgarten to Blanchot.” He has also presented his research at various conferences, published translations of Samuel Weber’s work, and written for the German newspaper DIE ZEIT.
Back to top