NEW COURSE: The German Refugee Crisis: Immigration and its Discontents

For decades, there has been an ongoing passionate debate among Germans whether Germany is a country of immigration (Einwanderungsland) or not. This question may sound strange to American ears, especially in the light of the current refugee crisis taking place all over Europe, but once it is put in a broader context, important insights into the development of the German self-image as a whole emerge. Ultimately, the debate is about identity and the definition of what it means to be German seems to be changing under the pressure of immigration. As President Joachim Gauck acknowledged earlier this year, “We are still learning to be a diverse society.” 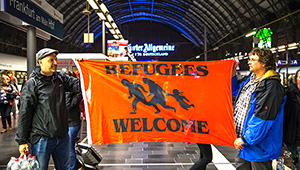 This course is trying to get a broader viewpoint on immigrants and immigration by doing three things: First, we will take a closer look at the situation in Europe right now, where the influx of refugees has led to both horrible displays of hostility and tremendous acts of hospitality. Second, we will add historical context to the question of immigration by analyzing important events in German migration history, from mass emigration waves in the 19th century to the arrival of South European guest workers (Gastarbeiter) in the 1960s and 70s. Last but not least, we will try to compare the German approaches to immigration, solidarity, and citizenship to those found in other countries, most notably the US.