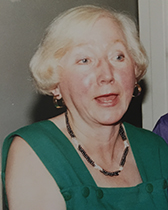 Professor Kathy Harms, who was born August 24, in Emden (Eastfrisia), Germany, and who died on April 4, at the age of 91, was an esteemed member of the Northwestern Department of German for almost thirty years.  After receiving her undergraduate degree at De Paul University in 1960, Professor Harms entered into the program in German, with Eric Heller as her principal advisor.  In 1968 she was hired an instructor of German.  Immediately upon completion of her dissertation on the nineteenth-century novelist Theodor Fontane, she was appointed to assistant professor of German and was promoted to the position of associate professor with tenure in 1974.  Professor Harms was a tireless teacher, who helped create a nationally recognized program of language instruction.

Among her professional accomplishments, she was a long-time member of the review committee for the Advanced Placement Test in German for the Educational Testing Service and was appointed to the College Board Advisory Council for German.  In 1981 the College of Arts and Sciences granted her its outstanding teacher award.  In the words of her colleague Rainer Rumold, “it was, to a great part, her achievement that the Department of German's undergraduate program was consistently rated to be among the top tier of all programs in the nation.”  From 1984 to 1987 she served as chair of the Department and retired from the University after the spring quarter of 1994.  She was a resident of Evanston during all of these years.

Her students remember her with great fondness, for, in the words of Professor Rumold, she evinced a “150% dedication” to the craft of teaching.  This dedication is evident in the letters students wrote to Professor Harms: "This class has been the greatest learning experience I have had in 14 years of school. You are perhaps the most culturally learned person I have met and your ability to teach your field seems unsurpassable."  "The energy, enthusiasm, vibrancy and good humor you brought to the class were all just terrific ... You made me want to work. You made me want to do well. Your enthusiasm made me want to learn the language. All I can say is thank you, Miss Harms."