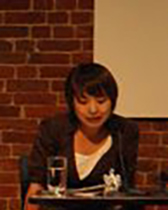 Her first book project based on her dissertation, Genealogy of Lumpen: Wastes, Humans, and Lives from Heine to Benjamin, focuses on a recurring but largely neglected figure in nineteenth-century German literature and political philosophy: Lumpen. She argues that the discourses of Lumpen record the reifying abjection of the poor and dispossessed during the emergence of European industrial modernity. Through contextualized close reading, her study reconstitutes moments of the immanent critique of the conception of wasted lives, specifically in the writings of Heinrich Heine, Karl Marx, Max Stirner, and Walter Benjamin. This study also investigates how the discourses of Lumpen have come to critically illuminate certain dimensions of contemporary global culture.

She received both her BA in Political Science and German and MA in Comparative Literature from Seoul National University. She also studied at the Ludwig Maximillian University of Munich and the Goethe University of Frankfurt, and was recently a Fellow of the Paris Program in Critical Theory during the 2012/13 academic year.