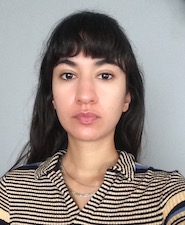 Eleonora Antonakaki Giannisi is a Ph.D. candidate in the Program of German Literature and Critical Thought with a Mellon Fellowship in the Critical Theory Cluster. She received her B.A in Theory and History of Art from the Athens School of Fine Arts in Greece and her MPhilStud in Philosophy from the Center for Research in Modern European Philosophy (CRMEP) at Kingston University, London. She was awarded a full scholarship from the Onassis Foundation for her Master’s Degree. Her Master’s thesis was focused on the notion of censorship in Freud’s earlier work and was supervised by Étienne Balibar. Her fields of interest include modern German philosophy, Marxism, psychoanalytic Freudian theory and sociological thought. Her current research relates to technology and fragmentation in the philosophical work of Georg Simmel.