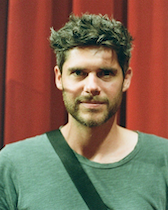 Roman Hutter is a Ph.D. student in German Literature and Critical Thought, affiliated to the Critical Studies in Theatre and Performance Cluster. He received a BA in History and a MA in East European History from the University of Vienna. Before coming to Northwestern, he has been a researcher in Vienna and a Visiting Scholar at the University of Michigan, working on Romanian-German Literature and cultural policy during the Cold War. In addition, he realized two theatre productions in Vienna during this time.

His current research focus is shaped by a strong interest in German theatre and literature dealing critically with topics like social mobility, class struggle, self-optimization, self-discipline, surveillance, the biographical illusion, and the promises of the narrative of a “better life” or fears of losing the “good life.”