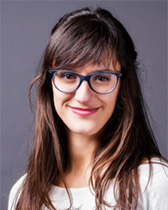 Nina Melovska received a B.A. at University Ss. Cyril and Methodius in her hometown Skopje, North Macedonia. Her bachelor’s thesis entitled “The Aspects of Truth and Lies in Postmodern Politics and Advertisement” compared Hannah Arendt’s essay Truth and Politics to Jean Baudrillard’s book Simulacra and Simulation. Nina received her M.A. at of Colorado Boulder, where she completed a thesis that explored the relationship of the individual and the social system as represented in two novels from the late 18th century – Karl Philipp Moritz’s Anton Reiser and Goethe’s Wilhelm Meisters Lehrjahre. Her current research interest continues to dwell with questions of subjectivity and institutions in German literature, with particular regard to Kafka’s institutional novels. In addition to her current research, Nina is interested in the role language plays in the formation of concepts and the extent to which it constrains the understanding of certain ideas.