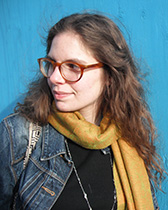 Ariel Weiner is a Ph.D. student in Comparative Literary Studies with a home department in German and holds a Mellon Fellowship in Jewish Studies. She received her B.A. in Classics and Religious Studies in 2015 from the University of King’s College in Halifax. Her research interests include the work of Walter Benjamin, continental philosophy, media and communications theory, psychoanalysis, hermeneutics, and Jewish thought, particularly regarding questions of language, mediation, and perception.